Craig Richardson: A Life Worth Living, With Disabilities 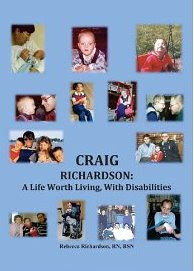 As the mother of a child with Wolf-Hirschhorn Syndrome, I experienced most of the emotions possible in parenting Craig over a 25-year period, including shock, sadness, confusion, fear, crisis, overwhelming love, grief, anguish, numbing fatigue, anger, joy, pride--the list goes on and on. When he was three, I wrote the letter to Exceptional Parent Magazine which facilitated the networking of other families, and the start of the 4P- Support Group. As a nurse, I experienced and observed the other side of "patient care" constantly, evoking more emotions of gratitude, dependency, neediness, and disappointment at times with his medical care. When Craig died, I began writing his life story, and I focused heavily on those emotions, because they were so intense in our lives. I have published this memoir, and want to share our family's journey with others, especially those who are on their own unique pathway with a special needs child. A huge issue for families is balancing the needs of each person, especially the siblings of the child who, by necessity, commands a disproportionate share of the attention and resources. Keeping our marriage alive, and our family "doggedly happy," as I describe us, was a struggle at times. I include the coping strategies we used to carry us through, with the hope that others can gain strength for all they need to do to help their child reach their full potential, and keep their entire family thriving.

Craig's book is available through Amazon.com for the paperback or Kindle version (the beginning can be read gratis), and also at OutskirtsPress.com at a lower price, especially for orders over 10 books.

You may notice that the title of my blog is shorter than the title of the book; before publication, a friend highly recommended I add "With Disabilities" to the title, to further define its genre.

I would love to hear feedback from anyone who reads Craig's story, and about your own situation.

Posted by Rebecca/Becky Richardson at 7:55 AM No comments: 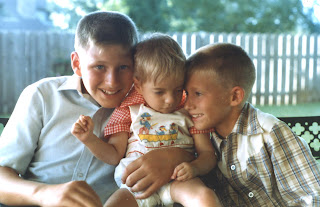 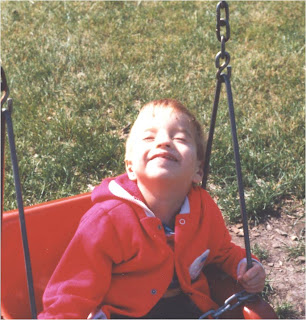 Born in 1981, Craig Richardson was soon diagnosed with a chromosomal deletion, and its grim prognosis. Within a year, he had stopped breathing, and began having devastating seizures. In this account, his mother, a registered nurse who had worked in neonatal intensive care units, relates how their family coped with the exhausting challenges during Craig’s twenty-five year life span, with medical insight, and the quirky humor which helped them survive emotionally through the years.

In 1983, she began networking families with Craig’s rare syndrome, Wolf-Hirschhorn or 4P-; the beginning of the 4P- Support Group which has connected over 500 families, as a national organization.

The book promotes the author’s belief that every couple needs to pro-actively work to strengthen their marriage, especially those with difficult situations. In their marriage, they have coped with four cross-country moves as an FBI family, numerous prolonged hospitalizations, the balancing of the needs of three uniquely different sons with their launch into adulthood, and “Retirement: The Final Frontier.”

The book details Craig’s birth and his death processes, and addresses the contemporary social issues of abortion, quality of life, National Health Insurance, euthanasia, and the potential for “Death Panels” to evaluate, and possibly eliminate, those whose lives are adjudicated as not worth living.

I am currently looking for a publisher for this book; I have submitted it to a Writer's Agency.

AUTHOR BIOGRAPHY: Rebecca Richardson graduated from Allen Memorial School of Nursing in 1968, and received a Bachelor’s Degree in Nursing from George Mason University in 1981. She has held a variety of nursing positions, within a VA Hospital, at Navy Hospitals, both as a member of the Navy Nurse Corps, and as a Civilian, and at Edward Hospital in Naperville, Illinois.

She has done extensive genealogical research, and self-published the Gorman Family Cookbook and Memorabilia of 1998 and the Gorman-Luhring-Curran Genealogy of 2007.

She helped establish the 4p- Support Group, which has evolved into a non-profit organization of over 500 families. For more information: http://www.4p-supportgroup.org/index.html

She was formerly a member of Toastmasters, and achieved the level of “Competent Toastmaster” in 1995. She is considered a warm, comfortable, humorous speaker by her friends; those who are not her friends have not been consulted.

She has been a Hospice Volunteer, Pastoral Eucharistic Minister to the Sick, and currently facilitates a Parkinson Disease Support Group.

She and her husband have been active in various leadership roles within the Marriage Encounter Community, since their initial involvement in 1980. See: http://wwme-nova.org/ 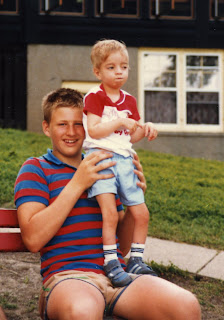 This is Craig at age 5, with his big brother, Alan.
Posted by Rebecca/Becky Richardson at 11:45 AM No comments: